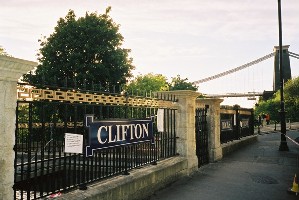 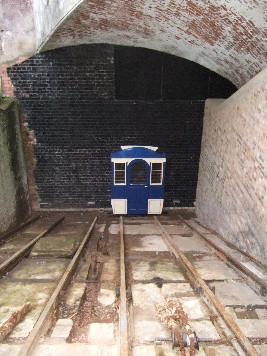 Please note that children under 14 are not allowed, and that visitors will be escorted through in groups of 10 on both Open days and visits down the tunnel. This is a condition of insurance.

Patrick Handscombe sent me this fascinating letter from Gerald H Daly (late Head of Engineering BBC West Region.) written April 23rd 1974 when he was researching the Railway's History. It gives a brilliant insight into the work done and use by the BBC during the war. To see the photos too, see BBC old BBC radio equipment site which includes memories from the people who used the equipment.
If you have any experiences or photos please let me know (email Maggie.Shapland@gmail.com, or write to me at the Computer Centre, University of Bristol, Tyndalls Avenue, Bristol BS8 1UD)

Technical Facts about the cable wheels and rail

The diameter of each wheel is 6'1" with 16 spokes, the rim holding 2 cables. The wheels are 5'3" apart. The wartime wall has been built on top of them
The cable/ wire rope was made by George Cradock and is still in place
The gauge is 3' 2 1/2". 6 rails can be seen: 1 more is under the left hand steps, and 1 under the right hand steps put in during the war. 29" is between the sets of rails, and 30" in the middle where the original hewn steps are.
The rail itself is 5" tall, 4" base, the rounded width is 2 1/2, height 1 1/4" so flat bottom rail. Its base is wide, while the top is narrower.
The rails are pinned 25" apart with a simple pin. The rails lie on wood, not concrete. The larch sleepers are rotten. May Photos show the pin and rail.
More facts (added 12 July)

Probably over 4000 people entered Rocks Railway in Clifton on Saturday 21 May and Sunday 22 May despite the rain and wind, and were all hugely interested. Sir George White, great grandson of the great George White who founded the railway, performed the opening ceremony. Visitors were only able to visit the top station due to Health and Safety reasons but were able to see down the railway tunnel and see the cable wheels and rails. There was an excellent exhibition for the Clifton Rocks Railway in the top station with Peter Davey and other volunteers explaining everything.
This was to raise public awareness of the railway and rally support for its full restoration. As part of the planning for the event, it was intended that the hoardings currently hiding the top of the station are removed, the railings repaired, the signage replicated and the area generally tidied up.
This formed part of the Bristol Public Transport Heritage weekend (Streetcars of Desire). This was centred on Bristol Docks and the Industrial Museum at Princes' Wharf where there was a Rally and Running Day on the Sunday.